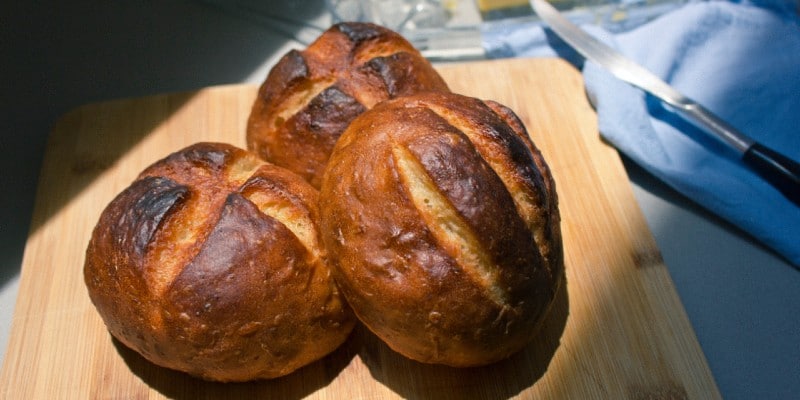 Brioche bread is a versatile loaf, roll or bun that can be used for anything. But is brioche vegan? Can vegans eat brioche buns?

The difference between bricohe and normal bread is that brioche is a very rich bread. Whereas normal bread can be made using nothing more than flour, water, salt and yeat, brioche also contains eggs, milk and butter to make it tastier than standard bread.

That means that unfortunately, brioche buns are not vegan. However, it is possible to buy or make vegan brioche.

Brioche is a type of bread which originates from France. Brioche buns are light and airy with a dark golden, flaky crust.

The ingredients commonly used in brioche are:

Brioche often contains 250g of butter and six eggs per loaf. This makes it very rich, almost akin to pastry, but not vegan-friendly at all.

Most brioche recipes include eggs, butter and milk which makes brioche not suitable for vegans. However, vegan brioche buns are available in various supermarkets and vegan-friendly restaurants.

When baking vegan brioche you can replace the eggs, butter and milk with ingredients that do not come from animals.

Aquafaba is the name for the water which you get in a tin of chickpeas. Translated from French, it literally means ‘bean water’.

When opening a can of chickpeas, most people pour the water down the drain. But this viscous liquid is actually a great replacer for egg white in recipes such as vegan brioche.

Where to buy vegan brioche

As a vegan, you’ll obviously want to avoid traditional brioche made with eggs and dairy. Luckily, vegan brioche buns are available to buy in UK supermarkets including Tesco, Asda and Waitrose.

Four-packs of Make No Bones vegan brioche buns are available to buy in Tesco and Waitrose.

Asda’s brioche rolls come in regular and chocolate chip varieties and are part of the Free From range.

How to make vegan brioche

For simple vegan brioche rolls that have a solid crust and a light, fluffy centre, check out this recipe from LazyCatKitchen.com.

If you want to bake vegan brioche burger buns topped with poppy seeds, I recommend this recipe from TheGreedyVegan.com

This vegan brioche loaf will taste amazing slathered with homemade strawberry jam. Get the recipe from RainbowNourishments.com

Did you even know that vegan brioche donuts were a thing? I didn’t until I saw this recipe from HolyCowVegan.net and now I really want to make them!

The sweetness of brioche is perfectly complemented by chocolate. To make these fluffy, soft vegan chocolate brioche buns, you’ll find the recipe over at VeEatCookBake.com

If you want to bake your own vegan brioche at home, here are some things to look out for when baking…