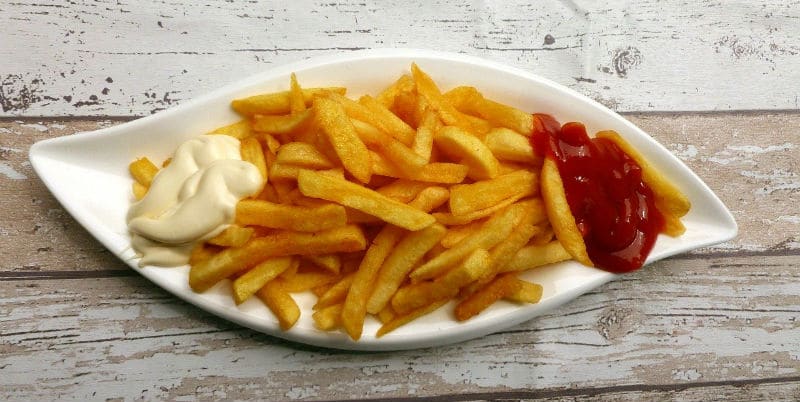 It’s admittedly quite rare that a vegan version of something is as good as the original. But, when it comes to vegan mayonnaise, Hellmann’s have nailed it! I will proudly say that Hellmann’s vegan mayo tastes way better than the non-vegan version.

In this review of Hellmann’s vegan mayo, I’ll describe exactly why I think this is the best vegan mayo in the UK and we’ll look at what it’s made of, the nutritional value and where you can buy it.

I’ve tried a lot of different vegan mayonnaise brands. On the whole, they taste like vegan mayonnaise, rather than mayonnaise. I’d describe this as similar to how a low-fat or low-sugar version of a product often tastes like you would expect the diet version to. Not bad, just not quite the same. Hellmann’s vegan mayo, however, is different.

Hellmann’s vegan mayonnaise tastes almost the same as Hellmann’s real mayonnaise. The main difference is that it doesn’t have that sickly, eggy smell. The vegan mayo is thick, creamy and tastes delicious. There’s nothing to not like. And other reviews I’ve found on the internet are just as glowing.

Whether you’re a vegan, have an egg allergy or are just looking to reduce your consumption of animal products, Hellmann’s vegan mayo should definitely be on your shopping list. With this mayonnaise, you won’t need to buy a separate version for any vegan or non-vegan members of your household – it’s so good that everyone will enjoy it.

I have vegan mayo with a lot of different meals. It’s my go-to dipping sauce for chips, potato wedges and pizza crusts. I also love to make vegan coleslaw by mixing some chopped carrot, cabbage, red onion and apple with a spoonful of mayo. It’s better than any shop-bought coleslaw, vegan or otherwise.

What is Hellmann’s vegan mayo made of?

The ingredients of Hellmann’s vegan mayonnaise are very similar to those of the original ‘real’ mayonnaise. The main difference is that there is no egg in the vegan version. The egg is replaced with modified maize starch and some natural flavouring which contains mustard.

Yes. Hellmann’s vegan mayo is gluten-free and suitable for coeliacs.

Mayonnaise tends to be very high in calories. Hellmann’s do have a ‘light’ and a ‘lighter’ than light version, but unfortunately, neither of these are suitable for vegans.

This table compares the nutritional value of Hellmann’s vegan mayo to the non-vegan equivalent:

Where to buy Hellmann’s vegan mayo

The Hellmann’s brand is sold in the UK, Europe, the USA, Latin America, Canada, Australia, the Middle East, India and South Africa. Hellmann’s goes under the name ‘Best Foods’ in the United States west of the Rocky Mountains, East Asia, Southeast Asia, parts of Australia and New Zealand.

Hellmann’s vegan mayo is available in the following stores:

During Veganuary, Hellmann’s introduced four new flavours of vegan mayo in four different colours. These were beetroot (pink), basil (green), spirulina (blue) and turmeric (yellow). As these were limited edition flavours they are not currently available to buy but may possibly make a comeback in January.

What did you think of Hellmann’s vegan mayo? I’d love to hear your opinions in the comments below.