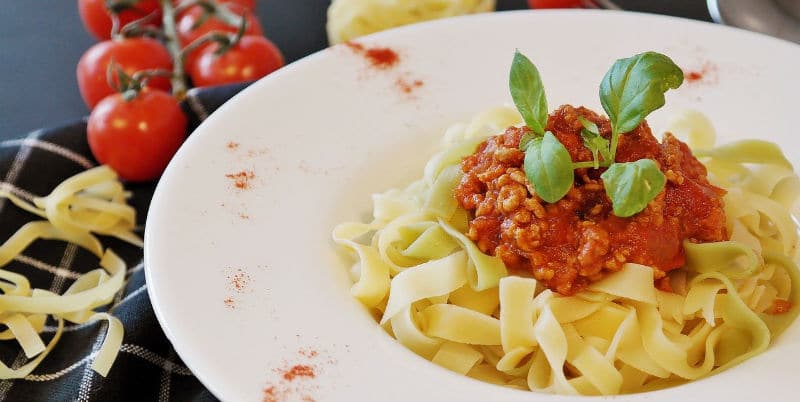 Vegan mince is such a versatile ingredient that can be used in many vegan dishes. If you’ve never cooked with it before, this post will tell you exactly how to cook vegan mince to make it the tastiest, plus I’ll give you some ideas for tasty vegan meals to make with it.

Don’t do what it says on the packet!

Firstly, let’s look at what not to do with vegan mince. What you don’t want to do, is follow the instructions on the packet!

Vegan mince cooking instructions according to the packet:

Hob
Instructions: Heat a little oil in a heavy based frying pan or wok. Add one-quarter of pack and cook on medium heat for 3-4 minutes. Check food piping hot throughout before serving.

If you follow the packet instructions to cook your vegan mince it will taste like the blandest, driest thing you’ve ever tasted. It will be horrible and will put you right off, particularly if you’re comparing it to juicy beef mince.

Vegan mince naturally tastes of very little. As you cook it, it behaves the opposite way to meat mince in that rather than giving off juices, it becomes drier and drier. However, the great thing about vegan and vegetarian mince is that it has the potential to soak up lots of sauce, becoming very juicy and saturated with the flavours of whatever you cook it in.

How to cook vegan mince

Here’s how to cook vegan mince the right way…

Firstly, the hob is best. Yes, you can microwave it, but it’s rare that microwaving anything is the best way to do it.

Before you even think of putting your frozen vegan mince into the pan, you need to add some things to give it taste because vegan mince on it’s own tastes like nothing.

Onions and garlic go well with every vegan mince dish. It’s always good to give them a little head start by lightly frying them in oil for a few minutes before you add the mince.

Other ingredients which tend to go well with any vegan mince dishes are mushrooms, peppers and chillies. Depending on the dish, you may also want to add kidney beans, canned mixed beans, cooked carrots, peas and sweetcorn.

Something else I would always add to vegan mince is nutritional yeast flakes. Nutritional yeast is a vegan staple ingredient that I add to pretty much everything I make. As well as adding a nice cheesy flavour, nutritional yeast is also really good for you and high in b12, which is notoriously difficult for vegans to get. Cooking at high temperatures can destroy some of the nutrients in the yeast, so it’s recommended to stir it in right at the end of cooking.

Vegan mince will always need some kind of liquid adding to keep it moist. This could be gravy, vegetable stock, passata, tomato puree or a tin of chopped tomatoes. As well as stopping your mince from drying out, your liquids also add extra flavour.

At the very least you’ll want to add salt and pepper and probably some dried, mixed herbs. If you’re following a recipe and it calls for other herbs, add them in to give your vegan mince dish the desired flavour.

Vegan mince doesn’t usually take as long as animal mince to cook. That’s because, really, all you’re doing is heating it through until it’s hot. There’s not a lot of actual cooking required. The cooking time will vary depending on the brand and it can be anything from three to 15 minutes, so this is one thing that you will want to look at the packed for.

Vegan lasagne is often made by using vegetables instead of mince. But for a meatier-tasting lasagne that’s closer to the original, you could use vegan mince either in addition to or instead of vegetables.

To cook your vegan mince before putting it into your lasagne, I would recommend adding a tin of chopped tomatoes, some vegan red pesto, garlic, oregano, basil, red wine, vegetable stock and nutritional yeast. Some chopped mushrooms would also be a great addition.

To make the bolognese in vegan spaghetti bolognese, I would fry onion, carrot, celery, garlic, mushrooms in a pan before adding the vegan mince. For a juicy sauce, I would add chopped tomatoes, passata and tomato puree. Basil, oregano, nutritional yeast, salt and pepper work well for seasoning.

For an extra-special spag bol, add a large splash of red wine, some vegan Worcestershire sauce and some sundried tomatoes.

Making a vegan cottage pie is really easy. To make the mince base you could use onion, carrot and peas or even a bag of frozen mixed vegetables. Add your vegan mince along with tomato puree, vegetable stock, soy sauce, vegan Worcestershire sauce, nutritional yeast and salt and pepper.

For the mashed potato topping, add interest by trying different vegetables as well as plain old potatoes, like sweet potatoes, parsnips or swede. You can use any kind of plant-based milk and margarine to make the mash.

Mince isn’t often used for curries but when you add chunky sweet potato and fresh spinach leaves for texture, it can actually be really nice.

To flavour the mince for a curry you’ll need onion, ginger, chillies, tomato passata, curry powder, vegetable stock and mango. You could also stir in fresh coriander and mint leaves at the end if you wish.

Serve with lemon rice and a paratha or roti.

Chilli con carne (without the ‘carne’ in this case) is a really versatile dish that you can serve in many ways. Enjoy it with crusty bread, in tacos, on top of nachos, with rice or on a jacket potato.

Check out this easy vegan chilli recipe from Seven Roses.

The vegan mince in a burrito can be cooked using the same ingredients as chilli con carne (above). However, you’ll want to add less liquid as a runny chilli won’t work well in a burrito as it will be messy to eat.

Oven-baked sweet potato cubes with smoked paprika and chipotle flakes make a great addition to the burrito along with the chilli. Add some tinned mixed beans in tomato sauce, a touch of salad, some salsa and vegan sour cream and you’ve everything you need for a fantastic mince and bean burrito.

7. Savoury mince in a jacket potato

Savoury mince is a great filling winter dish which is lovely on top of a jacket potato. The ingredients are onion, garlic, carrot, peas, sweetcorn, peppers and mushrooms, although you could add any other bits of veg than need using up.

Whilst you can buy vegan mince and onion pies (not to be confused with the kind of mince pies you eat at Christmas), it’s really easy to make your own. The recipe for savoury mince works well, just make sure you don’t add too much liquid so that it doesn’t leak out of your pie.

For the pastry, I like to be lazy and use ready-rolled pastry to make pies as it’s just so easy. However, if you want to make your own pastry from scratch, you can do it with just three ingredients – flour, salt and sunflower oil.

Do you have any other ideas for ways to cook vegan mince? Let me know in the comments below.