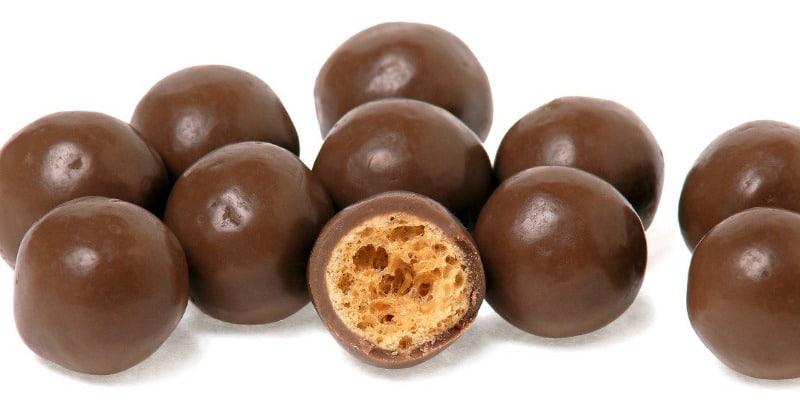 Maltesers are a light and airy biscuits balls covered in chocolate. Manufactured by Mars, they are one of the most popular chocolate treats in the UK. Unfortunately, Maltesers are not vegan.

So what’s a vegan to do? Surely new vegans can’t be expected to commit to a life without Maltesers? Fear not, vegan Maltesers alternatives are available. And if you like baking, I’ll also share the recipe for making your own vegan Maltesers.

Why are Maltesers not suitable for vegans?

Like most chocolates you can buy Maltesers aren’t vegan because they contain milk.

Can you get vegan Maltesers?

Currently, Mars does not make any vegan Maltesers. If you’re craving Maltesers but don’t want to consume animal milk, then your choices at the moment are to try a vegan alternative to Maltesers or to make your own vegan-friendly homemade Maltesers.

If you want to help the cause and encourage Mars to create a vegan version of your favourite chocolate biscuit balls, then there’s a petition online to ask them to do just that. You can sign the petition here.

In January 2020, UK health food chain Holland & Barrett launched a vegan alternative to Maltesers in 790 of its stores as well as online. The crunchy dark chocolate balls are called ‘Ballers’ and are made by Doisy and Dam.

Also available from the vegan confectionary brand are brightly-coloured, sugar-coated ‘D&Ds’ which are a vegan version of M&Ms and ‘Buttons’ which are similar to Cadbury Dairy Milk Buttons.

As well as being dairy-free, Doisy and Dam’s Ballers are free of palm oil (unlike Maltesers) and also promise a fair deal for cocoa farmers.

Look out for Doisy and Dam’s Ballers in selected branches of Holland & Barrett, Boots, Sainsbury’s and Whole Foods Market.

How to make vegan Maltesers

If you can’t find any Maltesers alternatives in your local shops, you might want to have a bash at making your own homemade vegan Maltesers from scratch.

So, what will it be?

If you’re desperate to get your hands on vegan Maltesers, your options are:

If you find any other ways that vegans can enjoy Maltesers, please let me know in the comments.