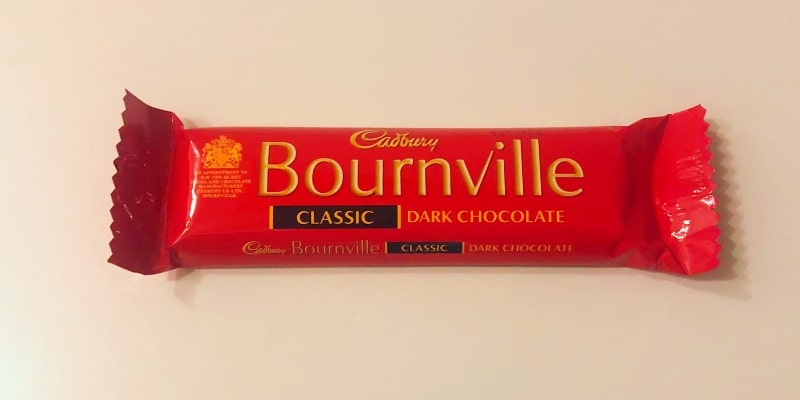 Dark chocolate can be a good option for vegans and those looking to avoid cows’ milk. However, some dark chocolate brands actually contain milk, just like milk chocolate does.

Even if dark chocolate is dairy-free, it may contain palm oil, which some vegans prefer to avoid. Additionally, some chocolate bars which have all vegan ingredients may potentially be contaminated with milk in the factory environment.

Read on for all the details on what’s inside Cadbury Bournville chocolate, so that you can make your own decision about whether to eat it or not.

Cadbury Bournville chocolate is generally suitable for vegans. However, it does contain palm oil which some vegans choose to avoid due to links with deforestation. Also, Bournville is produced on the same production line as products which contain milk, so it is not suitable for people with severe milk allergies.

Let’s look at each of those ingredients and whether they are vegan friendly:

Whilst there is no milk in the ingredients of Cadbury Bourneville chocolate, it cannot be guaranteed to be 100% dairy-free because it is made on the same production line as milk chocolate. Therefore, Bournville is not suitable for those with milk allergies.

Veganism is not always black and white. What’s acceptable to one vegan may be unacceptable to another. And that’s fine. We are all free to make our own decisions about what to put in our own bodies, and that doesn’t make anyone any less of a vegan.

With Bournville chocolate, the two grey areas are:

If you know where you stand on these issues, then you can decide whether you are happy to consume Bournville chocolate or not.

If you need some more information, take a look at these resources

Cadbury Bourneville cocoa powder is vegan. The ingredients are cocoa powder and sodium carbonate, which are vegan. However, it is produced on a production line with products that contain milk, so those with a milk allergy may wish to avoid it.

The preparation instructions to make hot chocolate with Bournville cocoa powder suggest adding semi-skimmed milk. Vegans can easily substitute this for any plant-based milk to make a vegan chocolate drink.

With Bournville Cocoa, you’re required to add your own milk, and that can be any kind of milk, whether dairy or plant-based. However, with Highlights you’re only required to add water because the dairy milk is already included in the powder.

Bournville orange is similar to classic Bournville chocolate in that it is generally vegan, but with some caveats. The chocolate contains palm oil, which some vegans may wish to avoid due to issues with deforestation during production. Also, Bournville orange is made in the same factory as Cadbury milk chocolate, so there’s the potential for cross-contamination.

Cadbury Bournville Old Jamaice Rum & Raisin dark chocolate is generally vegan. However, some vegans may wish to avoid it because it contains palm oil. Also, it’s made on the same production line as milk chocolate, so it may contain traces of milk and may not be suitable for those with a milk allergy.

Bournville giant buttons are made to the same recipe as Bournville bars. They are generally vegan, but vegans should be aware they they contain palm oil and also that they main contain traces of milk as they are made in the same environment as non-vegan products.

Just like Bournville chocolate, Bournville Easter eggs are generally vegan-friendly. However, vegans should be aware that the chocolate recipe contains palm oil and that the Easter eggs are produced in the same factory as other Cadbury products, so there could be a risk of cross-contamination with cows milk.

Unlike Cadbury Bournville chocolate, Bournville cookies are not vegan. They contain whey powder, which is made from milk, as well as whole egg powder.

If you’re desperate to get your fix of Bournville cookies, take a look at this recipe which you can make with Bournville dark chocolate and Bournville cocoa powder.

Cadbury Bournville fingers are accidentally vegan. There are no animal-derived ingredients in the biscuit or the chocolate coating. Like other Bournville products, they are made alongside milk chocolate so may not be suitable for allergy sufferes due to the risk of cross-contamination.

Has Bournville chocolate always been vegan?

Cadbury changed the Bournville recipe in April 2019. Prior to this date, Bournville dark chocolate was made using milk. If you have any old bars hanging around, you might want to check that the ingredients don’t include milk.

This website exists to help you to transition to a vegan lifestyle and stick to it.

Whether you’re just starting out or have been a vegan for some time, Choose Veganism is here to make things easier.