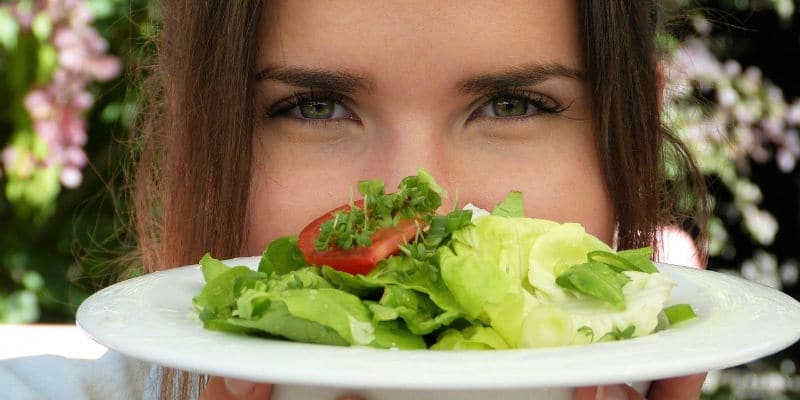 There are three broad reasons why people go vegan – for the animals, for their health and for the planet.

For most people, it’s one of those reasons which drives them to become vegan, and then they go on to learn more about the other benefits which spurs them on to continue with their vegan diet. In this post, I’ll look at the facts behind the main reasons why people go vegan. I’ve also interviewed several vegan bloggers who give their reasons for going vegan.

Preventing the exploitation of animals is the key factor in many people’s decisions to go vegan. Vegans believe that non-human animals deserve to have many of the same rights as humans, including the rights to be free from pain, fear and suffering.

Many omnivores, and even vegetarians, are oblivious to the fact that it is impossible to produce meat, eggs and dairy products without animal suffering. There are no such things as cruelty-free animal products. Watching video footage from farms and slaughterhouses can be a common thing which opens people’s eyes to the cruelties of animal agriculture.

Avoiding animal products is the easiest way to take a stand against animal cruelty and animal exploitation.

Long before it was a popular thing to do, I quit eating meat. For years, I had felt at odds with consuming animals, because I truly cared about them. Once I made the connection to the reality of the food I was eating, there was no turning back. I could no longer close my eyes to the brutal truth of factory farming and exploitation of animals and instead chose to use my voice to protect animals. It was a remarkably liberating experience. It is why I became vegan.

Carefully-planned vegan diets are often much healthier than diets which contain an abundance of meat and dairy.

The British Dietetic Association confirms that a well-planned vegan diet can “support healthy living in people of all ages” whilst the American Academy of Nutrition and Dietetics says that appropriately planned vegan diets are “healthful, nutritionally adequate, and may provide health benefits for the prevention and treatment of certain diseases.”

There are a number of documentaries which demonstrate how diets which are heavy in meat and dairy products are fuelling the obesity epidemic and also some which show the health benefits that people who have switched to a plant-based diet have experienced.

I chose to convert to a plant-based diet due to health reasons. Lessening the amount of animal fats intake has helped me greatly to combat inflammation throughout my body. Since being on a plant-based diet, I now feel more pep in my step. I also enjoy converting traditional recipes into plant-based ones, I find this challenge fascinating.

Of course, not all vegan diets are healthy and ‘junk food vegans’ certainly exist. Going vegan is a great opportunity to learn about nutrition, try new foods and improve your culinary skills.

When you get all your nutrients from plants, you’ll have more opportunities to add healthy options like fruit, vegetables, whole grains, nuts and seeds which are full of vitamins and minerals.

I initially became vegan because of health. For a few months I had been getting home from work so tired I had to get straight in bed. I decided to try vegan to see if it would help with my energy levels. The first day in, a friend sent me a few minute video about animal welfare on YouTube and I almost vomited. After that I wasn’t going back no matter what, but as a fun bonus it definitely helped my energy levels significantly! Even when I eat vegan junk food I still feel significantly better then I did as an omnivore.

More and more people are doing their bit to help the environment by reducing plastic waste, saving water and getting better at recycling. But did you know that avoiding animal products is one of the most effective things that you can do to lower their carbon footprint?

Meat and dairy are incredibly bad for the environment. Huge areas of rainforest are destroyed every day to make space for soya bean crops which are used to feed cattle. If these crops were used to feed humans directly, there would be enough food for everyone in the world, ending malnutrition in developing countries.

Meat production also uses huge amounts of water to grow the crops that feed the animals as well as fuel to transport both grain feed, animals and animal products.

My main reason for becoming vegan was to help the environment. I’m passionate about reducing my impact on the planet – ever since learning how much the animal agriculture industry contributes to climate change and deforestation (particularly the Amazon Rainforest) I knew I couldn’t keep consuming animal products.

My other reason is health, although I only realised this once I’d committed to the diet. I’ve never been so healthy! Since going vegan I’ve felt better than ever, with so much more energy. It’s been such an easy transition, too. I can’t see any reason to go back now as it’s been a positive change for both myself and the environment.

How to make a change

Whatever your reasons for considering trying a vegan diet, you’ve already made the first small steps by doing research. It’s important to educate yourself on exactly what’s involved in animal agriculture and why people go vegan so that you can make your own informed decisions.

Every time you switch one animal product for a vegan one, you’re helping animals, improving your health and preserving our planet for future generations.

We are a wife and husband duo raising two daughters. Since our first-born started eating solids we became more aware of what we eat and what we should give to her. We are reading a lot about nutrition and healthy meals, when my husband bumped into the Forks over Knives documentary on Netflix. It was so powerful that after doing some research whether the facts stated there are in fact facts, we turned to a plant-based diet quickly. And we couldn’t been happier. Getting acquainted with the vegan community made us open our eyes and hearts towards what is really behind our food. We feel lighter, healthier and happier at the same time.

Emese and Nandi run the vegan and gluten-free blog MyPurePlants.com

2 thoughts on “Why do people go vegan?”