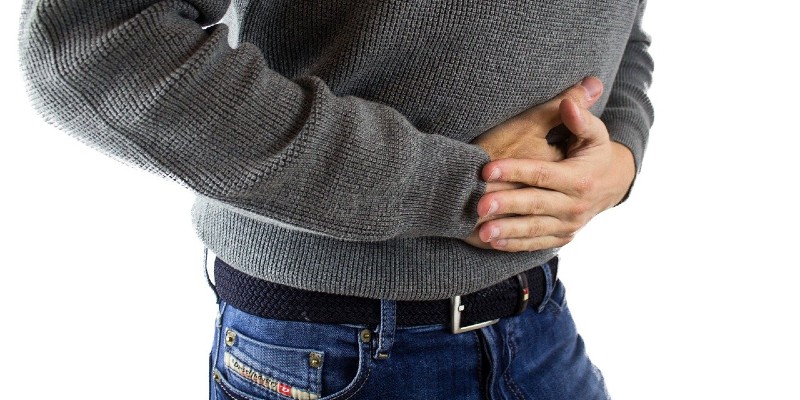 If you’ve recently adopted a vegan diet and have found that you’re suddenly feeling bloated and gassy, then you’re not alone. Bloating is a common (and thankfully temporary) side effect of switching to a plant-based diet.

This article uncovers the science behind gas and bloating on a vegan diet and explains how long you can expect new vegan bloating to last. I’ll also give you some easy-to-action tips on how to prevent bloating whilst still enjoying all the vegan food you love.

Why does going vegan make you bloated?

The main reason why new vegans can feel bloated is that a vegan diet typically has a lot more fibre than an omnivore or vegetarian diet.

Fibre is a carbohydrate which is produced by plants and it is not able to be digested by the human gastrointestinal tract. Instead, it’s broken down by the good bacteria inside the gut. With a very sudden increase in fibre, there’s just not enough gut bacteria to deal with the extra fibre.

Beans and lentils are popular ingredients in most vegan diets. Whilst these legumes are very healthy, they contain indigestible sugars called oligosaccharides. Just like fibre, these need to be broken down by the bacteria in the intestines.

Cruciferous vegetables are green leafy vegetables such as broccoli, cabbage, kale, cauliflower, cress, bok choy and Brussels sprouts. These veggies contain an oligosaccharide called raffinose, which we can’t digest. Again, bacteria break down the food via fermentation, resulting in gas, especially if there aren’t enough bacteria to do the job.

How to prevent bloating on a vegan diet

The best way to prevent bloating on a vegan diet is to make the switch gradually. This will give your body time to adjust to the excess fibre by producing more healthy gut bacteria to break it down. If you make small changes to your diet over time, you can switch to a vegan diet without experiencing any symptoms such as bloating or gassiness.

Water plays an essential role in digestion and it helps fibre to move through the body. Without enough water, excess fibre can literally plug you up, causing consitpation and more bloating. The amount of water you need to drink varies from person to person, depending on your size, activity level and the weather. You should aim to drink enough water that you need to urinate every couple of hours, and your urine should be pale in colour.

The cell walls of plants take a considerable amount of effort to break down properly. Give your intestines a break and start the grinding efforts in your mouth with your teeth and saliva. Swallowing smaller pieces will mean that your stomach acid has more surface area to attach to, so that when your food reaches your gut, much of teh work has already been done.

How long does vegan bloating last?

It’s not always possible to make the switch to veganism slowly. When pledging to become vegan for Veganuary, many people make the switch overnight. In this case, you’ll want to know how long vegan bloating lasts.

According to reports collated from online forums and groups, vegan bloating lasts between two and four weeks for most people.

Thanksfully, vegan bloating is a temporary issue. If several weeks sounds like far too long to cope with bloating and gassiness, there are some things that you can do to get rid of the problem much faster.

How to get rid of vegan bloating

Taking a good-quality vegan probiotic that contains acidophilus and bifidus strains of bacteria will help to increase the levels of good bacteria in your gut. This will help to combat gas and bloating.

Take your probiotic daily on an empty stomach when you first wake up for the best results. Just be sure to choose a vegan-friendly brand, as some probiotics may contain animal ingredients like gelatin, casein, honey, propolis and cholecalciferol (vitamin D3).

Peppermint is commonly used to relieve digestive upsets including gas, bloating, trapped wind and indigestion by relaxing the muscles in the gut. The best way to ingest peppermint is by drinking peppermint tea.

For the most benefit, drink your peppermint tea with no sugar. The best time to drink peppermint tea to combat bloating is immediately after each meal. You can drink up to five cups per day if you wish.

Studies have shown that mild physical activity can help to clear excess gas and reduce bloating. Exercises like brist walking, cycling or yoga can help trapped wind to disperse, relieving symptoms of bloating.

One thing to bear in mind, is that removing gas via exercise can involve flatulence. If this is a concern, then solo outdoor excercise may be preferred to indoor group classes.

Abdominal bloating is a common syptom for those who have recently transitioned to a vegan diet. The main cause of bloating and gas for new vegans is an increase in dietary fibre. Within two to four weeks, bloating should subside on its own as your stomach produces more bacteria to break down the fibre.

The best way to prevent vegan bloating is to make the transition to vegan diet over several weeks or months. Drinking more water and taking more time to chew food can also help to prevent bloating. Common remedies to get rid of bloating include taking a probiotic supplement, drinking peppermint tea and doing gentle exercise.