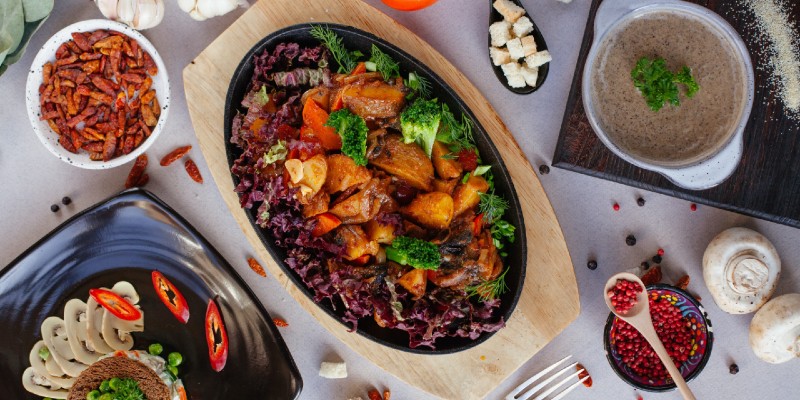 There are many ways to go vegan. Some people will go cold-turkey, some prefer to ease into it slowly by reducing meat and dairy gradually and others go vegetarian first. One great way to sample veganism is to go vegan for a week.

Going vegan for a week is a target which is easily attainable. Whilst going vegan for a month in January for ‘Veganuary’ or May for ‘Meat Free May’ can be a great idea, a month can feel like too big of a commitment for some. Setting yourself a goal of just seven days to focus on eating a vegan diet is short enough that you can easily achieve it, yet long enough to see some benefits.

The benefits of being vegan for a week

Step-by-step guide to eating vegan for a week

For the purpose of this challenge, it’s best to focus on food. Don’t worry about toiletries and cosmetics which may have been tested on animals or alcoholic drinks which may contain traces of animal products. Let’s keep this simple:

2. Organise your fridge, freezer and cupboards

Look through your kitchen and categorise al the food you already have in the house into vegan and non-vegan. You might want to select a fridge shelf, a freezer drawer and a kitchen cupboard where you put all of your non-vegan food so that you know that it’s off-limits for the week. It’s much better to do this now than when you’re hungry and looking for something to eat.

You really don’t want to go out and buy avocados, aubergines and asparagus and then find that you actually have no idea how to put them together. It can be helpful to have a list of meals that you want to make so that you know which ingredients that you like.

Some meals will be veganised versions of things you already love, such as swapping your meat mince to vegan mince in your spaghetti bolognese. Other meals will be things that you’ve never eaten before, so do some research and think about what you’d like to try.

If cooking isn’t your forte, there are vegan meal delivery services which can send you vegan meal prep for the week.

There are some vegan staple ingredients which you’re likely to need that you don’t yet have at home. These include:

Other vegan staples which should probably be on your list are:

The best places to shop for food are large supermarkets, health food shops and local greengrocers and markets.

Smaller supermarkets tend to lack many important vegan alternatives, so bigger is better where supermarkets are concerned. In January, you’ll find a much wider range of vegan food in supermarkets than at other times of the year.

Health food shops can also be a good source of tasty vegan treats. These shops vary with some stocking mostly pills and potions rather than food, but some do have great produce sections. And when buying fruit and vegetables, the freshest, cheapest and most environmentally-friendly products can usually be found in local independent shops and markets.

6. Plan ahead when eating out

Vegan restaurants may be few and far between but you’ll find that almost every restaurant will have some vegan options on the menu. Chain restaurants usually have larger menus and so tend to have the most choice for vegans.

If you don’t have a say in the choice of venue, for example if it’s a friend’s birthday celebration, then look up the menu online. If there are no vegan options, you can call the restaurant and there’s a very high chance that they’ll be able to make you whatever you want to eat with a few days’ notice.

Learning more about the reasons why people go vegan can be very motivating. There are lots of vegan documentaries that you can watch such as ‘Cowspiracy’ which explains the link between animal agriculture and climate change, ‘What The Health’ which shows the link between diet and disease and ‘Earthlings’ which shows how animals are treated on farms.

A healthy vegan diet can easily provide you with every vitamin and mineral that your body needs, with the exception of B12. That’s because B12 comes from soil which is eaten by animals and stored in their bodies. A great vegan source of B12 is nutritional yeast which you can add to pretty much anything.

9. Don’t be a perfectionist

If you slip up, it really doesn’t matter. Remember that just trying a vegan diet for a week is a great step to make so if you accidentally eat something that isn’t vegan, just forget about it and carry on. Veganism isn’t about being perfect, it’s about doing what we can to reduce animal suffering.

Everyone is different in the foods that they enjoy so it’s always a good idea to create your own meal plans rather than follow any one elses too strictly.

However, if you’re looking for a quick and easy vegan meal plan for the week which requires no special ingredients and doesn’t require you to spend lots of time cooking, then take a look at the table below.

What to expect when you go vegan for a week

The health benefits of switching to a vegan diet can kick in pretty quickly for some people. Within a few days of going vegan you may notice: